On leadership, product-market fit, and failures: A100 member Clark Johannson is still far from the sidelines

From his early days with the family business to running 12 companies (and counting), A100 member and CEO of Clickspace, Clark Johannson, shares his passion for learning, how to recognize true market fit, and how to know when you just need to walk away.

What can you tell us about your entrepreneurial journey?

I grew up with an entrepreneurial father, and when I was 16 years old he helped me start my first business. I think I always aspired to be like my dad, and so became fascinated about businesses and starting businesses.

As I got older, I just loved the innovation of technology and being able to create something. One minute, it’s not there. And then six months later there’s this product that people are using, they’re creating with it, it’s out in the world and generating cash. That’s exhilarating.

I like being in a high-paced, fast-changing environment where I can create new products. Our family business was selling office supplies. We would buy them from a supplier and then sell them – but we had no control over the product. And there were five other companies in the same city selling the exact same product. We really competed on our inventory levels, how fast we could deliver it, and then price. Competing at price is exhausting.

When I started to pursue my own entrepreneurial career after we sold the family business, I knew I wanted to be in a place where I could differentiate beyond the other thousands of people and products, so that really led me into tech. From an early age I knew what I wanted to do — to create a company. I’ve now done about 12 companies.

Beyond that initial foundation, what compelled you to continue to build your own businesses?

“The reason I started all of my companies is because I want to be an innovator.”

You have these core values exercises that you do — who know, the “who are you” kinds of sessions. One of the things that was always consistent anytime I’ve done those exercises is that two of my core values are innovation and learning. I think that, every time I start a new business, it’s as though I’m learning and entirely new industry. I get an adrenaline rush from that learning and creating process.

People have said to me, “You’ve had some pretty good exits, why don’t you retire now?”. Though I’ve considered it, I’ve discovered that what gives me a lot of satisfaction about life is learning and innovation. I’m always going to do that. It’s just so much fun! It really gives me energy and drive. To sit on the sidelines and golf? I can’t do it.

In the early days, did you see other tech firms in Alberta that inspired you to try your own tech gig?

What comes to mind is three people who have strongly influenced my work.

The first was Bob Christianson, he had a company called International Petroleum Equipment Corporation. I started one of my first businesses with him called Repeat Seat. He really taught me how to raise money, how to create a capital structure and how to create a bigger company. Up until then, I’d always just used my own cash. He taught me more about how to actually raise money, and was a huge influence.

The next one was Glenn Fawcett — he was the guy who started Bust Loose Holidays. He’s a great friend, and he went on to own Black Hills Winery, one of the preeminent wineries in the Okanagan. Glenn taught me to take more risks. In a small window — I think around 60 days — he signed a deal with the owners of Black Hills Winery, put up a personal deposit, and had 60 days to raise $12M. And he did it. He’s an unbelievable executor. When you talk about ideas, he just executes like crazy.

The last one were partners in our family business: my brother and a guy named Don Sheck. Those guys are inspirational entrepreneurs. Don and I started a company called Strata Health Solutions, which we sold to a U.S. firm called Polaris Group. It was a great exit. Don taught me the importance of communication — that when you’re running the company, being able to communicate what’s going on is the president’s #1 job. Up until then I was really just focused on what’s my job. Understanding more about communication elevated me to be able to say, “we are all pulling in the same direction” and that it’s actually my job to communicate that.

With leadership, it’s often easy for people to abdicate their responsibility of being a leader. They want to make everybody happy. But what they really do is, by not holding people accountable, they’re doing a disservice to all those employees who are trying really hard. Don was great at setting an expectation, and communicating the expectation, and following up on the expectation.

These are all great entrepreneurs, and they’ve done other things, too. Just spectacular.

I suppose that, with learning being such a priority for you, you were also very open to listening and absorbing those lessons and examples.

You know, I want to have a strong opinion. But if someone comes back with a great response, it’s a really good feeling when someone rattles your thinking. You can feel yourself develop a new perspective that’s enlightening and advancing you. It’s amazing when your own thinking is disrupted.

How do you see the A100 impacting Alberta’s startup entrepreneurs, and how did it assist your journey?

The A100 membership is spectacular. Every time I sit on a bus or have a beer with one of those guys, I walk away thinking, “Wow, that’s just fantastic.” I get a lot of value out of just spending time with the members.

We’re members partly because we have a bit of self-interest — which for me, that self-interest is about learning. But we also share a focus on giving back. When members get together, all the people in the room are prepared to give back with their time and experience. And I want to do that, too.

What the A100 can do in the community is to bring some failure experience to earlier startups. With our network, we’ve earned scars that, if the right entrepreneur can accept the message, I think we would help them not make as many mistakes and increase the potential of them being more successful and, ultimately, get more of those startup folks into a growth stage. 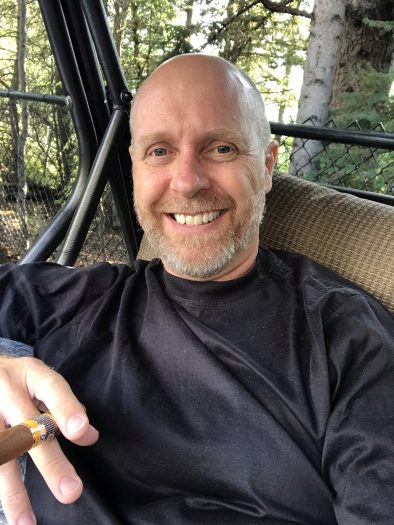 With 12 companies under your belt, what have you learned from your successes?

The most valuable thing I have learned from my successes is what it feels like to have great product/market fit. When we create a product, website, service or offering, we do our best guess at what the market wants. And then sometimes we go in to the market and it’s just lukewarm. It’s not good, it’s not bad, it’s just there.

But when you have a whole fit, the market pulls you forward. People are coming for your product, word of mouth is spreading, and you’re managing all this incoming activity. That feeling is success. That feeling is, “You’ve got this.” From the successes I’ve had, I’ve experienced that feeling. And now I know what I’m looking for.

When I get halfway there, some people say, “Yeah, we’re really doing well.” I now say, “No, we’re not doing really well at all. This doesn’t feel like what that felt like. That felt like, holy sh*t, we’ve got a product that’s working.” And it is a gut feeling.

“I think a lot of entrepreneurs think they’re doing really well, but they don’t really know what true fit feels like.”

Other than the gut feeling, what is another indicator that it’s not a fit?

My other indicator is that we have to keep working for the customer. What not a fit looks like is that I have to keep selling you the value. It’s when they try it, maybe like it, but for them it’s a three out of five. What success looks like is that it’s a buy and your customers start coming at you and you’re trying to keep up with that pull.

What have you learned from your failures, and what would you counsel others on how to deal with failures?

Failure is healthy. Everytime I failed with a business or a product or an employee, I took the time to figure out what really went wrong. You know, there are so many variables in getting a business to be successful, it’s amazing. For example, you go into it and you think you have this product right, and you go to create it and there’s a slight technical challenge and you can’t get it exactly like you originally designed and it eventually leads to product failure. Well, when you think about all the potential reasons why a product or a company might not work, there are just so many variables that it’s very difficult to avoid failure 100% of the time.

Too often, entrepreneurs are overly optimistic with the evidence they’re being presented. For example, you didn’t hit your sales number, or that rep didn’t get his calls done. What we tend to do is to not admit that the product’s bad, because that’s going to take all the motivation away. So you keep going and you keep trying and, even without modifications, you keep trying to sell this product — you just keep trying and thinking it’s going to get better.

“The biggest thing I’ve learned from failure is to look at those numbers, accept them as reality, and make a new plan. Stop stalling and hoping.”

You really only need three months of evidence to know if a product’s going to work in the marketplace. You get early indications much faster than you think, but folks will go for a year trying to pursue the same line because they don’t want to admit it didn’t work. Collect the numbers, look at the numbers, internalize them and accept them, then make a new plan if they’re not working.

Having an A100 member be able to share the lessons learned from their failures — and if the person is open to it and they trust them — they’ll say, “Yeah you know what? He or she is probably right.”

You know, when we were younger, we stayed in relationships too long when we knew they were toxic. Any why? Because we didn’t know anything different. When we’re older, we know on the second date that this isn’t going to work, and we say so and save everyone time.

In the spirit of learning, what book has had the greatest influence on you so far and why?

I want to share one book, because I think everyone should read it and it’s one that’s really changed my thinking in recent days. It’s called “Predictable Revenue” by a guy named Aaron Ross. The premise is this: sales is the engine for all these businesses, and it’s really important to get your sales model working. Well, sales has changed a lot — you used to be able to phone people. But now you can’t reach anyone on the phone. Ross educates the reader on how to create a team that divides the key roles: sales development reps are going outbound to get new customers; and then how to deal with inbound customers — this is marketing individuals doing content marketing, lead generation, etc; and then an account executive closes that lead.

Ross outlines how this division of responsibilities establishes greater productivity. Then he gets really vigilant about, how do I know I’m going to have predictable growth if I’m not measuring? And he breaks down how each role on that team can measure their outcomes that then creates and engine that provides predictable, steady, consistent growth. I’ve had some profound learnings from that book, so I highly recommend it.